This coming Saturday on April 15, my first book, co-edited with Tanya Cothran, comes out.

It is based on many of the things I’ve written about on how-matters.org over the years – funding for grassroots initiatives, the importance of listening and responding to needs on the ground, the implications of our obsession with “results,” cultural competency for all manner of do-gooders.

When I started putting this idea together over five years ago, the world was a different place. I was a different person. At the time, venture philanthropy was coming on the scene. There was a lot of talk about business models and start-up management techniques and how they could improve the nonprofit sector. Those of us focused on funding to grassroots groups in the Global South were busy trying to understand why other organizations weren’t investing in working directly with people at the community level.

When people in the aid and philanthropy sector learned about our approaches to making small grants at the international level, there were always questions that revealed how “risky” this seemed to people:

“How do you find the groups?” (In other words, “It’s much easier for us to fund the same, usual players in the capital cities who talk like us.”)

“Aren’t most local NGOs corrupt?” (In other words, “I believe the hype about briefcase NGOs.” or “I inherently distrust people who are from different cultures or nations.” or “I may have racist or classist assumptions that have never been challenged.”)

“How do you measure your results?” (In other words, “Small grants are too insignificant to make a real dent in any social issue.” or “Hard numbers are the only way I know if I am getting a return on investment.”)

We didn’t get it. For us, not investing in the wisdom, experience, and leadership of people most affected by poverty was the opportunity cost we were unwilling to bear. In our minds, placing our relatively small amounts of money in the hands of people who are already doing something to address the challenges in their own communities was actually one of the least risky things we as funders could do, and also one of the smartest. 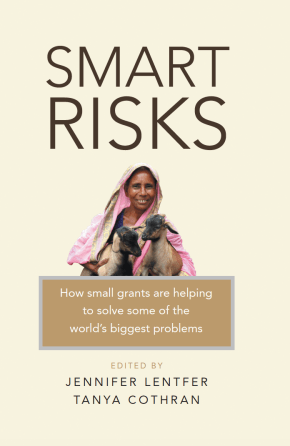 The book’s 22 authors from 20 different organizations from seven countries represent a range of players within the global development sector, and together as grantmakers they have collectively made:

Frankly, we wanted to get some more attention for our approaches in a sector that still viewed funding grassroots groups as too “risky.” We wanted to highlight the often more serious risks of supporting even more irrelevant aid interventions or the risk of new “players” on the scene turning into more over-bearing funders. And so we named our book about small grants, Smart Risks.

In January, I attended a “big” funders meeting on supporting movements in D.C. There, with the idea of “smart risks” in the back of my mind, I wondered aloud to the group if more of a venture capital mentality could be useful. What if more donors could be okay with partners trying something and not succeeding as long as there was learning and strategy adaptation? Especially given the two steps forward, one back nature of advocacy and activism around the world.

A person of color in the room responded to school me. There are different expectations about who is allowed to fail shaped by racism, sexism, and other biases.

“As an African American male, I was brought up knowing there is no room for failure for me,” he offered.

He was right. Power and cultural dynamics shapes the standards to which certain groups of people are held. To call for more “risky” behavior from donors is deaf to that reality. Being able to take risks at all is a product of privilege.

Risk implies future uncertainty. That is something Smart Risks authors have learned to embrace. Risk also implies exposing something valuable to danger, harm, or loss – to something bad happening.

This something valuable is the money we bring to the table. Even if small amounts, and even if we are focused on the expected gains of lasting, transformative change over large scale or quick “results,” to deem an initiative or a group of people as “risky” continues to reveal the global power structures at play. We get the opportunity to “lose” money on small grants (let alone on large-scale, multi-million dollar anti-poverty projects), and that remains an undeniable privilege.

With the book at the printers, there’s no going back now. With “Smart Risks” emblazoned on the cover, hopefully those who haven’t yet considered funding grassroots groups may pick it up and discover that it’s not as risky as they may think. And hopefully readers of all kinds will use the book to continue to deepen their analysis of how power and privilege play out in our work.

Even as my thinking on the terminology changes, I want people to know that Smart Risks are totally worth it.

Does aid need a 12-step program?

Moving along on the do-gooder journey

“…and this is what we were already doing about it”

Getting money to the ground, directly

A new kind of donor: 4 things they do differently

White supremacy, black liberation, and global development: The conversations we’re not having

The power of the pen: Why I left M&E behind for communications

If ever there was a time…

E7-S8 Career Transitions. From the Humanitarian field to Peacebuilding with Ayako Tsujisaka

Let's talk about career transitions.  After over a decade working in the medical humanitarian field,...

5 Things a Graduate Student Must Do 5 Months Before Graduating

Recently, I was working with a student who expects to graduate this coming spring (it...

Young Champions of the Earth is a forward-looking prize designed to breathe life into the ambitions of brilliant young environmentalists.