I lost my son but I didn’t lose my hope 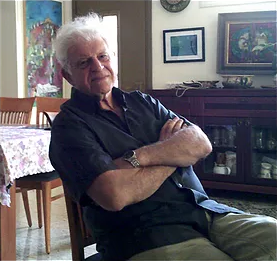 Last week I had a very difficult experience that I’d like to share with as many people as possible.

I joined five other bereaved members of the Parents Circle to make a team of six: three bereaved Israelis and three bereaved Palestinians. As it turned out, I was the only bereaved father among the group. All the others were the sons or brothers of victims of the conflict.

First, a personal confession: I came to Israel full of Zionist belief, which I hold to this day, and I have raised my children and grandchildren in the light of that belief. My youngest son, Noam, was killed in April 1999 near  Beaufort in Southern Lebanon, five days before the end of his IDF service, on the eve of Holocaust Remembrance Day. 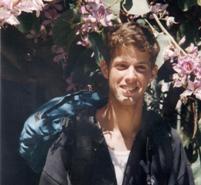 Our  team of six was scheduled to speak together before students from Nesher High School. It’s a regular activity of the Parents Circle, and has been taking place since 2000. Our message is clear: we, the members of the Parents Circle, Israeli and Palestinian families who have lost their loved ones in the conflict, clearly say that we want no more bloodshed. We are living, breathing proof that dialogue between the two peoples is possible, that reconciliation is possible. We also claim that without a process of reconciliation between the two peoples, a lasting peace will not be possible. Only a process of reconciliation, which deals with the deep wounds of the two peoples during the long conflict, can guarantee a process that will lead to peace. Our statement is moral, not political or sectarian.

While we were on our way to Nesher, we learned that a local politician published a post on Facebook that morning, in which he wrote “Bereaved Palestinian father = IDF soldiers are killers. Is this what we want to teach the children?” He immediately followed that by a call to arms: “Dear Jews, where are you? Come to Nesher with Israeli flags and help us cancel the talk by the Palestinian ‘bereaved father’ at Nesher High School at 10am”. 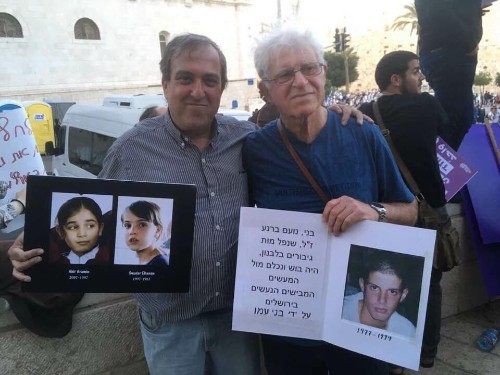 When we reached the school, we were greeted by a boisterous group of seven people, who greeted us with curses that cannot be printed here.  The “best” response came courtesy of a man from Lehava, who said to me, “I wish an Arab would kill you.” Several policemen stood at the entrance, keeping the peace, also as a result of Zino’s post.

We entered the school and were very warmly greeted by the school principal and the entire teaching staff. The Parents Circle has been speaking at the school for more than a decade, and has always been warmly received for its humanistic message. As we sat down and began planning our visits to the classrooms, the phone rang. It was the Ministry of Education, demanding that the talk be canceled. The principal called the regional supervisor who repeated the demand that the talk not take place.

The entire school staff was shocked. Teachers stormed the principal’s office, saying “we are ashamed to be Israelis today!” One teacher said that the events brought to mind 1933 in Germany. Some teachers burst out crying. We all felt that this event was unprecedented in all our years of educational activity.

We told the staff that this event must be leveraged as a learning opportunity. The principal and staff responded immediately: “We will go into the classrooms in your place, and explain the reason for the cancellation.” The Principal called the mayor of Nesher, himself a bereaved father, and he expressed full support of the school staff’s actions. As we left the school we met the mayor, and realized he meant every word he said.

A group of students, who noticed us leaving the school, ran to us and expressed deep sorrow at the cancellation of the activity.

We, at the Parents Circle, will not stop working endlessly to share our stories, together, in one voice. to show that there is another way.  To show that there is a possibility for peace and that if we, who have paid the highest price to the conflict, can acknowledge and recognize the other side, anyone can and should.

The ‘Call to Action: Now and the Future, COVID-19 and Gender Equality, Global Peace and...

If Stephanie had listened to the advice ‘follow your passion’ she would have continued with...