Tagged with:
Career Series, The Future of work in social change

How will the use of technology affect social change work

What does it mean to affect positive change in a society? What are the most meaningful ways to foster positive impact? Should one get a job in a non-profit focused on community-based empowerment in a particular sector? Or is it better to go the for-profit route and work for a big corporation or startup? Can one advance an ethical career of fostering change in a world where inequality is at an almost all time high? And how will the ever increasing use of technology impact the fundamental nature of social change work? An even bigger question, will there still be many jobs in the future of automation, robotics and artificial intelligence?

This post has some reflections on how the social sector and associated careers are changing.

1) Change is coming rapidly The nature of work is rapidly changing around the world today. Many of today’s jobs that are experiencing rapid growth including social media managers, drone operators, UX designers, cash transfer experts, community managers, and big data analysts didn’t exist a decade ago. A significant number of jobs that will emerge in the next decade and the skills that are required haven’t even been created yet.

2) Technology is fundamentally changing work– Who would have thought that taxi drivers might see their livelihoods threatened, or that financial investing could be done by computer algorithms (it is happening more and more. Would you trust investing to a computer or still want HUMAN INSTINCTS? Or a combination of both)? 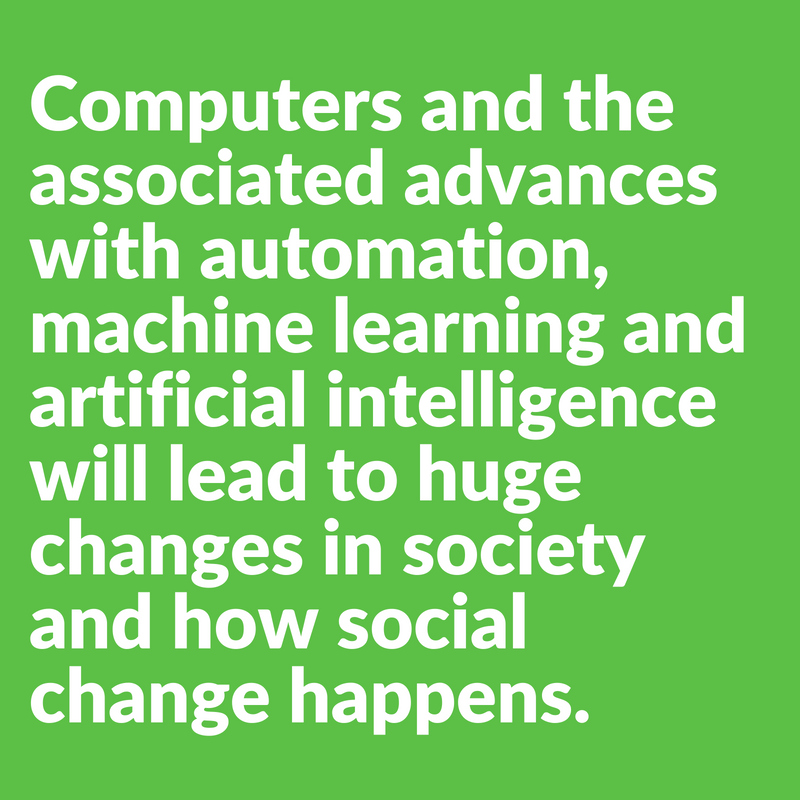 I still remember when I got my first cell phone for work in 1999 (and how expensive it was to use). The idea that within a decade or two that billions of people would have access to smartphones and access unlimited knowledge (including of course plenty of fake news) was unfathomable. Some of the changes that have resulted are large-scale disruption to the telecommunication industry, manufacturing and now this change is coming to legal, financial services, transportation and starting to impact education. One example of the changing impact of technology is that JP Morgan has a new contract review program that can review in seconds what it previously took paralegals over 360,000 hours to do (see  https://www.technologyreview.com/s/609556/lawyer-bots-are-shaking-up-jobs/).

While paralegals and lawyers will certainly not disappear the number of positions is likely to decrease and the skill set required will be much different. Think about customer service professionals (even those in the social change space) and how much is being automated these days. Of course I think all of us can talk about frustrating points when we just need to get a real human being on the phone and get stuck in the seemingly endless computer prompt cycle. While computers with artificial intelligence will get better at responding to our human needs there is still often a need for person to person interaction (thankfully).

For the future of social change work, there hasn’t been as rapid disruption coming, but it is vital to begin to explore what will the social change professions of the future look like? What will computers or artificial intelligence do and what will still be the essential human doing? McKinsey estimates that over the next 10-12 years between “between 400 and 800 million individuals could be displaced by automation and need to find new jobs by 2030 around the world.” While this estimate is for the global nature of employment, we don’t have data yet on what this might mean for people working in the social sector.

3)People and Human Skills still are essential – Although computers will take over many tasks or aid people in doing things better, we will at least need for the foreseeable future (and hopefully for a long time) the human soft skills of communication, managing and inspiring people and fostering collective action. In a recent report exploring the future of work McKinsey forcecast,

Workers of the future will spend more time on activities that machines are less capable of, such as managing people, applying expertise, and communicating with others. They will spend less time on predictable physical activities and on collecting and processing data, where machines already exceed human performance. The skills and capabilities required will also shift, requiring more social and emotional skills and more advanced cognitive capabilities, such as logical reasoning and creativity.

Since social change is such a people focused activity, it is likely we will continue to thrive and need to maintain a human edge to our doing (complemented by relevant tech and sectoral knowledge).

4. Education will be a life-long endeavor – The idea that one can pursue training in a field and have a career for life will be increasingly uncommon. The workers of the future will need to adopt a life-long approach to skills building and learning. Education is already changing since many people around the world can access facts and information at the touch of a screen. 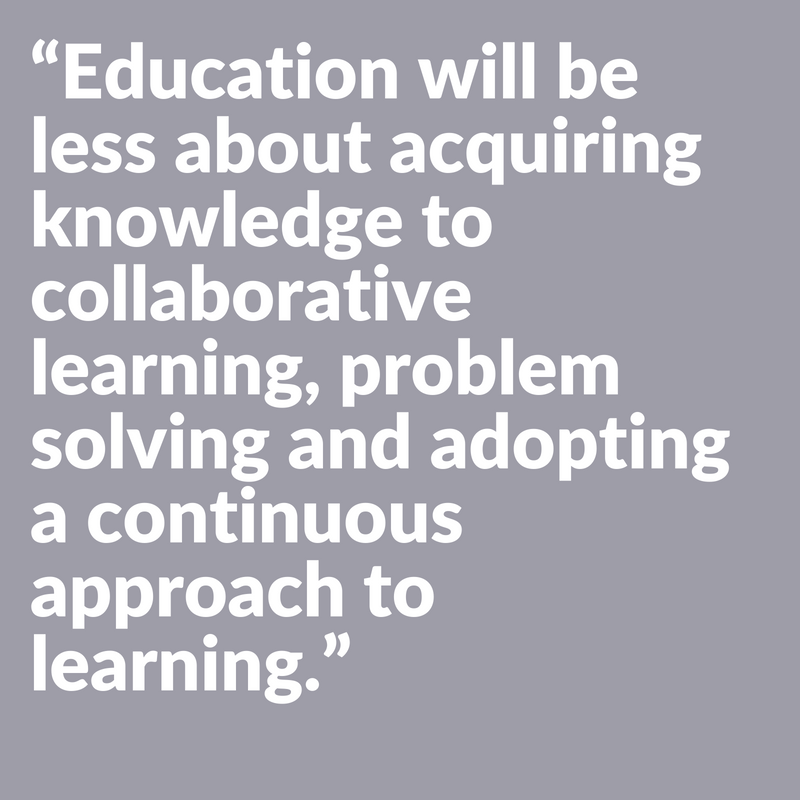 This means radical changes in how education is practiced, what it means to build a career and more.

5. We need new public policies – One of the debates in the future of work is will there be sufficient work in the future (there isn’t currently in many parts of the world)? Will inequality get even worse (It is bad. According to the Oxfam Global World Inequality Report, “because of high and rising inequality within countries the top 1% richest individuals in the world captured twice as much growth as the bottom 50% individuals since 1980” (p.7).

For many people around the world work means not only financial sustenance and means of purpose through one’s vocation. With increasing technological innovation, some forecast an age where full-time work with benefits becomes increasingly less common. One future scenario is a the creation of an even larger underclass of contract workers who may not have access to a basic social services or a social safety net at the time when inequality may increase even more (this is already the reality for many around the world). There is a strong argument that we need a radical change in the social contract otherwise a huge proportion of the global population will left out which can led to greater social unrest. For example Andrew Yang, formerly CEO of Venture for America is now a presidential candidate in the US. A central component of his campaign is the providing a Universal Basic Income of $1,000 a month to all Americans. As explained on his campaign website:

"Without Universal Basic Income, we will see opportunities shrink as more and more work gets performed by software, AI, and robots. Markets don’t work well when people don’t have any money to spend. Universal Basic Income is a vital step to helping society transform through the greatest automation wave in human history.”

Even Chris Hughes, the co-founder of Facebook is pushing for a similar approach. As he explains in a recent interview in Recode, “I worry about the wholesale job loss, absolutely, but I’m also personally really intent on making clear that wherever you fall on whether or not that’s the future or not the future, we already need a guaranteed income.”

Not everyone agrees with the dire estimate that the future of work will mean less work. As in other periods of rapid change, many jobs will disappear but entirely new areas will be created. Thus instead of a dire future of disappearing security and jobs, whole new industries and sectors will be created that may create many opportunities. Whatever will emerge in the future, to date there hasn’t been sufficient exploration of what this will mean for the social change sector. For example, in the international development space, how will the nature of the industry change? Will there be increasing use of cash transfers and tools like the block chain to track development projects? Does this mean that many of the people working in the international development infrastructure may be displaced or will they adapt to new opportunities? If so where will they go?

6. Change can come from all sectors – It is clear that for many years social change (however one defines the field) was seen largely as a space for the nonprofit and government endeavors. Professionals could develop a set of skills to help communities advance economic development, build stronger cultural and social institutions, and improve educational, health among other outcomes. A key trend in the future of social change work however is that we need to bring together an ever greater set of diverse actors to the process of advancing sustainable change, including the business sector, foundations, faith-based actors and more. In particular the idea that the private sector has an important role in supporting and effecting change is one that has become a tenet (although not all agree on this). Part of this is that although there is plenty of money in the world that could be used to advance health, education and sustainable development, the world doesn’t spend money according to these priorities. While over 1.6 Trillion a year is spent on defense, total official development assistance each year is far below this. According to the OECD in 2016, ODA was $142.6 Billion. While Global GDP in 2016 is over 70 trillion.

What does all this mean for individuals building or starting a career in the social sector? How can one prepare oneself with the knowledge, skills and abilities to thrive in a world of rapid technological innovation and the jobs to come? What will be the social change jobs of the future? How much technological knowledge will one need to be competitive vs. the more human side of the equation. These are critical questions as we continue to explore over at PCDN.global

7 Tips for Authentic Networking at Conferences

Hi there, do-gooders! We know that your heart and mind are in the right place,...

This is a sponsored post on PCDN Rotary Peace Fellowship Program Applications now being accepted...