Beyond panels and plenaries: how to deliver THE BEST presentation ever

I have been in one capacity or other in the field of Social Change for over two decades.  This means thousands of hours of classroom time and conferences.  As a result, I am NOT the most enthusiastic about sitting for a prolong period and listening to someone talk at me.... I feel like we need to simply shake things up.  In a world were YouTube videos rule and people are reading the least amounts possible and consuming their information via videos why do we still need to spend 8+ hours listening?

I am not saying, that social change topics shouldn't be addressed in the seriousness that they deserved.  But how effective and how long will you pay attention to speaker after speaker after speaker? 20-45 minutes I bet your mind will wonder (the monkey mind at best) you will get your phone out and check your Twitter account while the panelist speaks.... but hey, that's a conference.  While I appreciate conferences as a space for connection and growth, I am simply much more interested these days not only in the topics but rather HOW the information and interaction of these conferences is dispensed.  I give you a good example of an un-conference: Opportunity Collaboration.

But this blogpost is about a panel I attended yesterday at the Interaction Forum.

As I was looking for the break out panel sections, (and you know my hesitancy already) I chose a title that simply caught my eye as it was totally breaking molds. "Development Dirtiest Secrets: Periods, Privates and Poop".  "That has got to be an interesting session" I thought, as I head my way to room 151B.

Luckily my years of gender research payed off as I had a good basis to understand the topic.  This was a collaborative panel coordinated by Plan International on "difficult topics" such as menstruation (periods) , sexual and reproductive rights (penises) and sanitation (poop).  The thematic thread was how to work in development contexts and touch upon difficult topics that are taboo not only in rural communities but everywhere.

The panel was moderated by a senior director at Plan International and boy if it was empowering to hear a male talk about menstruation and periods.  He introduced the panelists, bravely told the story of the title and how even Interaction edited the original title from penises to privates.  Not only was the topic hard to talk about, he was also introducing that at the end we were going to do an interactive activity they do at Plan International.  A game, to ease on "difficult topics" and bring about changes in community and small groups.

Interaction is as serious a conference as it gets.  A gathering of top Development and Humanitarian professionals in Washington D.C.. An event opened by Bill Clinton and followed by two former heads of states.  And yet, my dream come true.  We were going to experience some different ways to learn stuff and maybe get to know the people around us in a different manner.

I was typing my notes in a round table of people and by that point I haven't done anything beyond politely smile at the women around me.

The first speaker was Saung Lee, Sr. Director School Health and Nutrition, Save the Children. She was a phenomenal presenter, clear, lots of energy and first engaged us asking what euphemisms we associate menstruation with.  Slowly we started saying: "Aunt Flow, Period, Shark Week, The English are Coming" and many others I cant recall.... As an audience, this was super awkward but there was laughter and we were definitely intrigued.  In fact, it was fascinating to learn what a vacuum it is, even in sexual education curricula, the topic of menstruation.  How hard it is to talk about it with communities and what a huge impact it is on the ability of girls to learn.


Even when development agencies address it by sending sanitary pads, systemic problems arise such as the need to provide panties as many girls don’t even have panties, or latrines to have the minimal space for privacy.  Lee ended up with an advocacy story in the country of Kyrgyzstan that had a huge massive campaign on this topic but even one of the Ministries didn’t allow the use of the word menstruation and had to use "girls special needs".  It was a fantastic presentation I learned so much.  I particularly love the menstruation emoji that they are working on as part of the campaign to ease the conversation around menstruation as a very important part of the lives of girls and boys too.  (Yes, boys too).  If these needs are NOT met, boys have mums, sisters, aunts are affected too.  Boys need to be allies not teasers. 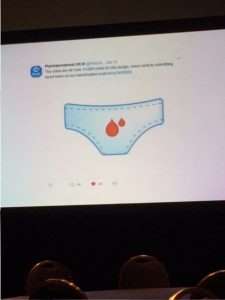 This is the period emoji to "normalize" the conversation around menstruation

The second speaker was not less fabulous although she brought a seriousness that is to be expected from Planned Parenthood.  The work they do around Sexual and Reproductive Rights in the U.S. and around the world is SO critical and SO many forces are against it.  Regardless of the fact-based presentation, I also learned and specially appreciated the online outreach that PP is doing, with its Instagram account where a T-Rex Sexpert responds fact-based answers to teens in the US and around the world.  This is a tad important given than 50% of the worlds population is 25 of younger we need to speak their language and be where they are.  This is a life-saving operation.

Last but not least was the short presentation about behavioral and mass media campaigns about sanitation.  How to reduce or eliminate public defecation in Africa and SE Asia.  In the former, behavior change conducted in small groups with community is effective. However,  in locations like Vietnam, we learned about a mass media campaign showing how unlucky a guy will be with finding a girlfriend after pooping in an open field and not washing his hand.  "You dont want a Mr poo, right"?

By then, we had been "talked out" for a while so the mood was like any other panel session.  But they invited us to PLAY a game.  It looked like a field with lots of obstacles.  Obstacles being sanitary pads and poos and the field was divided into sections with different scores.  The player will toss a bean bag if it hit something the team will answer a trivia question about the topic of the session. Team with most points win. 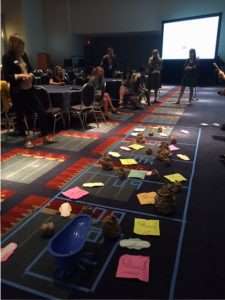 The field in question

First step was to name our teams, my table was "Shit Happens".  In less than 30 seconds we were friends and fighting for our team. We answered questions, we hit the obstacles and then we won. 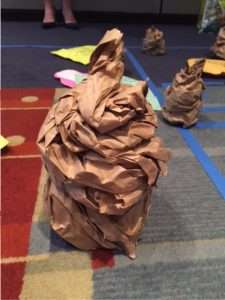 A closer look at the POOP obstacle

This is a fantastic way to meet people, to learn new things and you do it in a manner that doesn't feel like work.  Do you think anyone was checking their Twitter account while playing?

Never underestimate the power of creativity and breaking the barriers for true interaction.  Life is too precious to waste it on boring events.  Thanks Interaction for having a session like this one.  Enjoy the picture of the Period, Penises and Poop game. 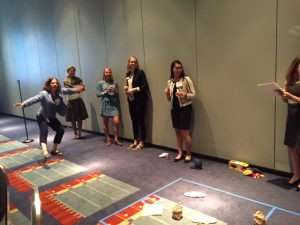 What a refreshing sight, we are NOT sitting, we are playing and having fun while discussing super important topics.

The Difference Between a LinkedIn Profile & Your Resume

At PCDN we work with a global community of amazing changemakers from many parts of...

Closing Season 7 of the infamous 2020 year, we talk about playing games for peace...