Tagged with:
Career Series, The Ultimate Guide to Landing A Job

Networking tips. Some people love it? Others despise networking and see it as something forced and often uncomfortable.

I will start off by saying that with I love networking. I am a born connector and greatly enjoy meeting, learning and interacting with people striving to make the world a better place. As an introverted/extrovert or extroverted/introvert, I am often deeply energized by environments where authentic networking and connections develop. However, I would like to also acknowledge that there are times when I find networking deeply frustrating, inauthentic, draining and event at times anxiety producing.

This post has some key tips and reflections about why I love networking and how to do it right.

In the right settings, networking can be an amazing adventure of connecting with people from many different backgrounds and sectors. There is something immensely rewarding linking with others who are working to advance change, whether it is in the startup world, peacebuilding, social entrepreneurship or related sectors. Coming from the mindset that we are all novices and experts at different things, as well as be teachers and students at the same time, can open up truly exciting possibilities for learning and collaboration.

Authentic networking that is rooted in being open to what I can learn from others, seeing how can I possibly help (not assuming one can) and genuine curiosity can serve as a basis for developing meaningful professional contacts, building a community of practice and allies.

There is also an immensely practical reason for networking; it can be crucial for building a successful career and a thriving organization. By some estimates, over 70%-80% of all jobs are filled in part due to connections in the US are filled in part due to connections. This doesn't mean that one can get a position through being well connected. But if you have the right skills and experience for a job opening, having someone linked to the hiring organization put in a positive work on your behalf can make a significant difference.

Why Not to Network
Despite all the positive aspects above, there are also some challenges to networking. First, it can be a huge time suck. Networking can take a tremendous amount of time and energy and prevent one from doing the work that really needs to be done. In almost every city I've lived in I could easily spend almost an entire week attending events, meet ups, and having coffees (thankfully I do enjoy a good cup). This doesn't even factor in the increasing role of online options of connecting to others  such as through Zoom, webinars,  Linkedin and related platforms which have now grown exponentially during the covid19 pandemic (trust me we've hit peak webinar). I will admit at times I’ve gone overboard and sought out my next event, without strategic thought or to avoid more challenging work (sales, content development, writing my next piece) that needs to get done to sustain PCDN. Networking can be a bit addictive of hoping to find the golden contact that will lead to the next big project, or lead or other things.

Second, networking at times can be anxiety producing. Most people (not all) have some self-doubt or imposter syndrome. Attending events, particularly when one doesn't know anyone sometimes can be intense.  For me personally I have given talks, lectured and trained thousands of people over the past two decades. I love networking when there is a particular reason for me to be somewhere, I have some contacts that know me or I have a formal role (such a speaker, organizer, etc.) However there have been times when I've attending events where I didn't have any contacts and while many times I've had a blast, at others I've experienced some self-doubt.  Rarely is the insecurity too strong, but at least a few times in the past years I've left events after 30 minutes (including one super hip one that had lots of movers and shakers) when I decided it wasn’t worth the effort.

Third, networking, if not about authentic relationships and connecting can be too much take or too much give and not enough about mutually beneficially connections. Going to a party or an event where people are seeking to take and not also thinking about how they can give can be frustrating or very time consuming.

What is networking?
One of the ways I like to think about networking simply connecting with interesting people. Networking can take place almost anywhere and often the best occasions happen in serendipitous occasions that aren’t planned. For example, I met a wonderful contact and friend in Prague over 25 years ago through some random connections. We wound up becoming great friends and also collaborated professionally several times.  Other times I’ve made great contacts through more organized conferences or events.

Networking can and should be about exchanging ideas, experiences, serving as a potential mentor or mentee where appropriate. Networking can also take place online via social networks such as LinkedIn, Facebook Groups, and Twitter.

Networking efforts can have a strategic goal, such as I need to expand my contacts in the angel or investing world as I am seeking to raise financial support for my enterprise.  It can also be 100% spontaneous (this is usually my favorite type) such as on a plane, in a Uber on a bus, or even in a park.

It is important to acknowledge that at times networking can be awkward, as delineating the difference a contact, acquaintance, friend, co-worker can become blurry. This can also make it challenging at times to know if it is appropriate to ask someone in your network is suitable or not. I've often found honesty is the best policy.

What Networking Isn’t?
Authentic networking, repeat after me three times, isn’t all about you or me.  Networking shouldn’t be about meeting someone and immediately asking them for something like a reference, job, etc. It ideally should be an organic process where a professional connection or chemistry (if there is one) emerges over time and is benefit to both individuals. In short being a giver and not just a taker is key.

How to do it right

Here are some key suggestions how to network based on authenticity and impact.

1) Don’t be a taker – As repeatedly emphasized networking can be wonderful when both parties involved respect each other and have a spirit of giving/sharing. This doesn’t mean you cannot ask your contacts for help such as feedback or an introduction,  but if you come across as only a taker this will not lead to long-term benefits. Be honestly interested in the larger issues, the work of others and be willing to help.

2) Join Professional Networks –  One of the best approaches to networking is find your tribe/group around areas of similar interest. If you’re part of a network, whether the Alliance for Peacebuilding (I am proud to have served on the board for two terms), PCDN or Net Impact this can give you more license to connect with others. Most networks organize formal and informal activities in which their members can interact.

3) Link with your Peers- Almost everyone is part of multiple formal and informal networks. This can be great place to work on networking in addition to  more formal professional networks. Linking with your university alumni networks, with family members, former professors, joining online Linkedin Groups and meetups are all great ways to develop meaningful connections.

4) Be Comfortable with Being Uncomfortable – Most of us have awkward moments when networking particularly in settings where we don't have connections.  In my opinion is it important to acknowledge this and not be too hard on yourself.  Here are some of the key challenges I've experienced:
· What do to when everyone else is in small groups and you need to find a way in?
· How to end a conversation that seems to have ended its natural course without being awkward?
· How to manage the self-talk of I wonder what others think about me?
· How to interact with those who one perceives as super successful or a higher status in one’s field?
· Knowing when it is time to go?
· When someone gives you a business card when it is really appropriate to follow up or not?


There are no magic solutions to any of these, but self-awareness and realizing that many others feel the same way can be helpful. Knowing your own personality, giving yourself permission to have fun but also mess up, etc., can all help

5) Take (logistical) Notes – A simple tip for networking at an event is ensure you take brief notes on a person’s business card or elsewhere. For example, I attend a lot of events and have too often made the mistake of talking to many people, getting business cards and then when I make the time to follow up don't recall what might be the right approach.  Taking brief notes such as chatted at X event and  potential follow up includes: send article on a particular topic, send connection to y and follow up for z can help.

Also try to follow up in a reasonable time period (1-5 days) or you run the risk of losing the potential contact.

6) Feel Free to Say No – Just because you met someone at an event doesn’t mean you have to agree to a follow up meeting. Of course, if you have time/interest and/or it is part of your job responsibilities saying yes can be great. But if the meeting or request doesn’t feel right, will put too much of a burden then feel free to pass. There are many ways to do this gently such as saying I don't have time right now, to share some other resources, etc.

7) Expand your Horizons – While I deeply enjoy connecting with people who are working on similar sectors  as I am,  expanding my horizons and connecting with people from very different backgrounds/fields can be can be even more beneficial.  Try to ensure that everyone you’re talking with doesn’t look like you, have the same educational/professional background, the same beliefs. It is a huge world out there and wisdom/expertise and solutions are everywhere. A recent example includes numerous conversations with Design Thinkers and practitioners, a field outside of my expertise but what I've learned has taught me so much for my own work and life. 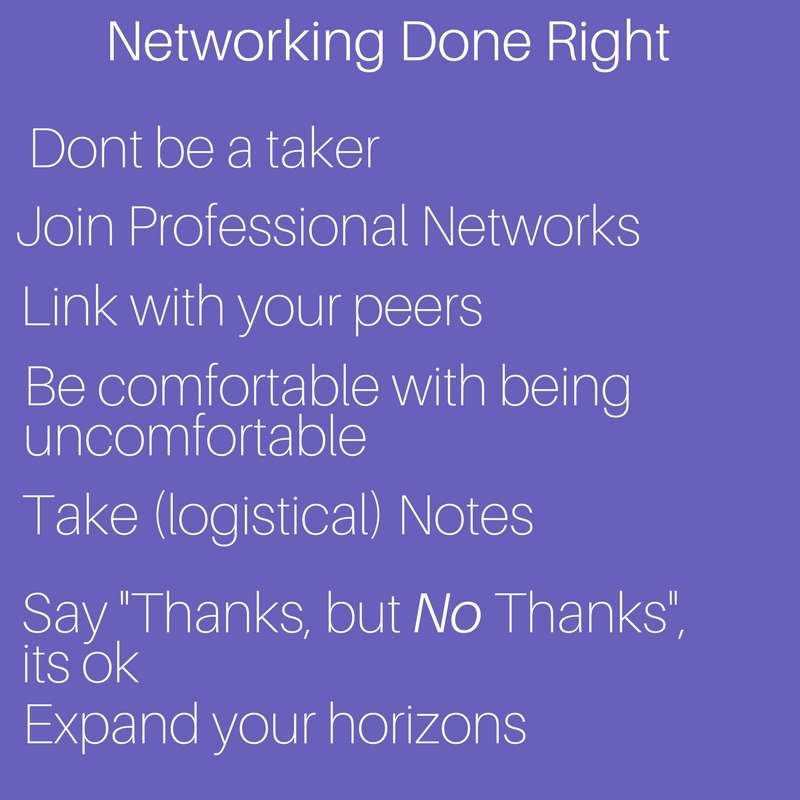 How Not to Network:

I’ve already highlighted many key suggestions of how (or not) to network authentically and for mutual benefit. Rather than add another  another list here is a short poem:

Networking is a way of connecting

Of mutual benefit and more

it can lead to connections and open doors

A shared community of conspirators for change

to sustain and maintain one’s work

When done wrong, networking rings of

Seeking to advance at another’s expense

And not being open to larger world

Of having a predetermined sense of people’s value

Without risking to see the common humanity of all.

What are your suggestions/stories about how to network effectively and ethically?

“If you have privilege, use it to do good” is just one of the many tips...

Jennifer Bangoura shares tips on how to succeed in the higher education space and her...