Social media, in the context of peace and conflict, can be an enabler of political agency and a positive social connector, but it can also be a driver of polarisation, hate speech and violence.

While significant time has been invested in understanding social media as a threat, how it can be more effectively harnessed for building peace is a question of increasing interest to elected officials, donors and peacebuilding practitioners alike.

This paper offers reflections in answer to that question, drawing on perspectives from interviews with peacebuilders in Lebanon, Nigeria and the Philippines, and survey responses, as well as the wider literature on the subject.

This paper suggests that social media has the potential to play a greater role in building peace in the following ways:

To take full advantage of social media’s potential, the paper recommends the establishment of partnerships between donors, social media companies and peacebuilding organisations; increased support for and emphasis on social media as a public space for positive political dialogue and countering misinformation; investment in a stronger evidence base; increased flexibility in design and funding for social media peace-oriented programming; and the safeguarding of civil society space in regulating the sector.

While this work was commissioned prior to the coronavirus disease (COVID-19) pandemic, it has significant resonance in the current context. Anecdotal evidence from peacebuilding organisations highlights the impact of the virus and the responses to it on conflict contexts and methods of peacebuilding. Social distancing is impacting on traditional approaches such as in-person dialogue. In the absence of face-to-face interactions, people, where possible, are gravitating towards social media and online platforms as a means to connect.

There is emerging evidence of rumours on social media relating to COVID-19 that are eroding trust in government and fuelling divisions in a number of contexts. The onset of what the UN has described as an ‘infodemic’ of misinformation has once again thrust social media into the spotlight.

As such, this paper offers ideas about how to work around current physical constraints, and how peacebuilders might leverage current reliance on virtual platforms.

E6S8: Re-shaping the World of Traditional Philanthropy with Randy Newcomb 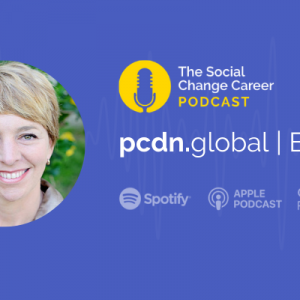 E6S8: Re-shaping the World of Traditional Philanthropy with Randy Newcomb