A note from the editors:

Amada Benavides de Peréz is President of Fundación Escuelas de Paz, a peace education NGO in Colombia. She is a long time member of the Global Campaign for Peace Education.

Amada attended the September 26 ceremonious signing of the peace accord between the Colombian government and FARC. She and colleagues have been working tirelessly developing and training networks of formal and non-formal educators for decades, contributing to the foundational peacebuilding work that made the peace agreements possible. In the coming months, Fundacion Escuelas de Paz, in partnership with UNICEF, IOM and USAID will be coordinating peace education efforts in territories formerly controlled by the FARC.

In the message below, Amada offers her reflections on a turbulent week that began with hope, only to collide with confusion and exasperation following the “NO” vote on the referendum.

We stand in solidarity with Amada, the peace educators and the citizens of Colombia for their continued courage in pursuit of peace through education. 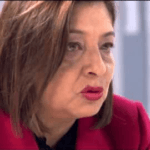 I am ready to give an answer to your kind communications and contributions of support and solidarity, after a week of disquietude.

Let me begin, taking up a phrase of Gabriel Garcia Marquez, which is circulating through social networks, that looks like it was written for this moment and identifies how things happen in this country – between amazement and madness, surprise and indignation.

It was as if God had decided to put to the test every capacity for surprise and was keeping the inhabitants of Macondo in a permanent alternation between excitement and disappointment, doubt and revelation, to such an extreme that no one knew for certain where the limits of reality lay.

– One Hundred Years of Solitude

On September 26 we were filled with excitement, attending the signing ceremony of the peace agreement between the Colombian government and the FARC. The assistants who attended from all corners of the country, full of hope, all dressed in white, vibrated with excitement when the FARC apologized to the victims and the country for all the damage they caused.

The Government, relying on general support for the agreements, insists that they must be countersigned by the plebiscite. The country is polarized, but there is confidence that “YES” will win.

On October 2, several factors, from climate to general apathy, lead to 60% abstention. And the big surprise…the victory of the “NO”, by a very narrow margin, less than 0.4%. A kind of desolation and bitterness covers the entire country. Hopelessness and crying is the common name. There is total uncertainty about what might happen, how the guerrillas will react, about the fate of four years of negotiation. Promoters of “NO”, perplexed, don’t know how to address this triumph. They never thought about winning.

After the deep sadness, the analysis: the Government was overconfident and didn’t make a strong campaign; “NO” promoters collected the feeling of part of the country; Christian churches provided a large number of voters by appealing to gender ideology.

The day after the referendum, the reaction: youth marches are called throughout the country. Bogotá was full of lights on the night of Wednesday, October 5; the multitudinous “March of Silence” advocates for continuance with the agreement in Havana; and protesters camp in the Plaza de Bolivar and promise not leave until the Government continues the Agreements.

Thursday, October 6, a bombshell: the manager of the NO campaign gives statements relating fraudulent and deceptive methods used to promote NO, appealing to the fear and anger of the people, with dirty propaganda, directed to different parts of the country and different social strata, and reveals the name of the companies that contributed to this campaign. He is pleased by the achievement, but his statements cause immediate reaction from political, social and economic sectors. Resignation from the party and the prosecution opens investigation into electoral fraud.

Tomorrow, we’re going to San Vicente del Caguan, to begin our program of “Schools for Peace” in 12 institutions, in the territory that was the heart of FARC operations. We must be there right now.

And on Friday, the news of the Nobel Prize to President Santos. There is unanimous opinion saying that the country is well deserved, for the effort he has made to take forward the peace process. For some sectors, the award must also be given to the FARC negotiator but this would not been prudent given the amount of resentment and the pain they have caused. Santos offers the award for the eight million victims of violence in the country.

On that morning, the joint statement from Havana:

After receiving the news, the Guerrilla and Government negotiators in La Habana deliver a joint statement with four points: They reaffirm their commitment to the Final Agreement, underlining its legitimacy.

Although the text of the Joint Statement is not directly a result of the prize, without doubt it contributed positive input.

Meanwhile, we continue to work on peace building through education for peace, thinking it will be the only way to change this situation that overwhelms us.

Tomorrow, we’re going to San Vicente del Caguan, to begin our program of “Schools for Peace” in 12 institutions, in the territory that was the heart of FARC operations. We must be there right now.

A hug to everyone for your solidarity.