[An improved economic situation was] “a necessary precondition to resolving what was previously an unsolvable political situation,” (Jared Kushner) 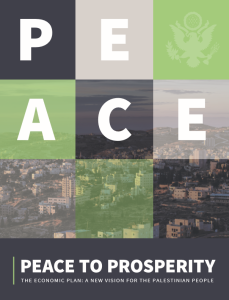 “Peace to Prosperity” can be seen as the first part of long waited ”Deal of the century”, an “out of the box” plan made by by the Trump administration. It was made for public in the Bahrain Conference late June 2019. The plan is billed as “a vision to empower the Palestinian people to build a prosperous and vibrant Palestinian society.” The political portion of the U.S. plan, is coming after Israeli elections in September 2019.

The United States has now released the economic portion of its proposed Mideast peace plan. The plan calls for a $50 billion mix of grants, loans and private investments over ten years to develop a future Palestinian state’s infrastructure, telecommunications, tourism and health care industries. Jordan, Lebanon and Egypt, states that have absorbed Palestinian refugees for decades, would receive nearly half the funding.

The U.S. initiative planed by the Trump administration is pursuing the goal of changing the Palestinian experience from a society of miserable “refugees” into a prosperous society.

The plan itself is laid out in a 40-page document that can be downloaded e.g. from White House webpage. The plan is divided into three parts: unleashing economic potential, empowering the Palestinian people, and enhancing Palestinian governance. Each section is around 10 pages long, which makes them appear equal in importance. The three sections are divided into sub-sections, where a total of 50 different topics are covered, from educational access to property rights and roads and rail connections. In this, the plan appears exhaustive.

Below some highlights from “Peace to Prosperity” plan, The White House  as source:

Billions of dollars of new investment will flow into various sectors of the Palestinian economy; businesses will have access to capital; and the markets of the West Bank and Gaza will be connected with key trading partners, including Egypt, Israel, Jordan, and Lebanon.

The resulting economic growth has the potential to end the current unemployment crisis and transform the West Bank and Gaza into a center of opportunity. 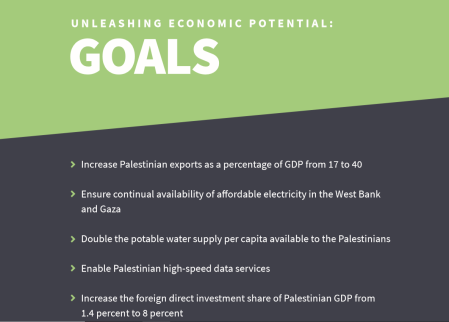 The second initiative will EMPOWER THE PALESTINIAN PEOPLE to realize their ambitions, Through

this initiative will enhance and expand a variety of programs that directly improve the well-being of the Palestinian people. It will strengthen the Palestinian educational system and ensure that students can fulfill their academic goals and be prepared for the workforce.

Equally important, access to quality healthcare will be dramatically improved, as Palestinian hospitals and clinics will be outfitted with the latest healthcare technology and equipment.

New opportunities for cultural and recreational activities will improve the quality of life of the Palestinian people. From parks and cultural institutions, to athletic facilities and libraries, this initiative’s projects will enrich public life throughout the West Bank and Gaza. 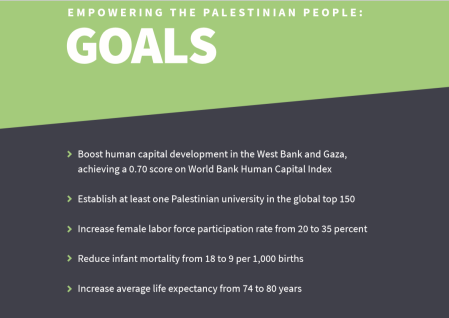 A fair and independent judicial branch will ensure this pro-growth environment is protected and that civil society flourishes.

International partners will work to eliminate the Palestinian public sector’s donor dependency and put the Palestinians on a trajectory to achieve long-term fiscal sustainability.

Institutions will be modernized and made more eﬀicient to facilitate the most eﬀective delivery of essential services for the citizens.

With the support of the Palestinian leadership, this initiative can usher in a new era of freedom and opportunity for the Palestinian people and institutionalize the policies required for successful economic transformation. 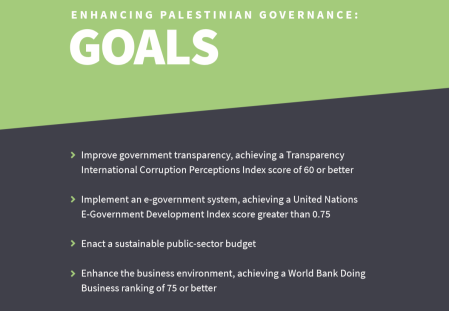 The plan aims to double the GDP of the Palestinians, and create one million jobs in 10 years timefrsame. Now the Palestinian GDP is larger than that of Somalia and South Sudan but smaller than Afghanistan’s. GDP per capita is around $2,200 in Ramallah, while it is more than $35,000 in Israel and $4,000 in Jordan. From 2012 to 2016, the Palestinian Authority received a total of more than $4 billion in aid, making them some of the “top recipients of non-military per capita aid in the world.” 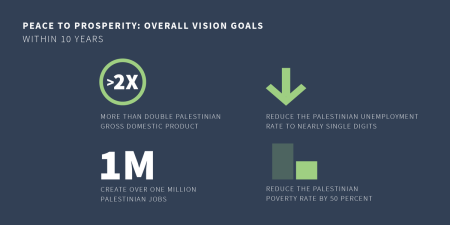 With the potential to facilitate more than $50 billion in new investment over ten years, Peace to Prosperity represents the most ambitious and comprehensive international effort for the Palestinian people to date. It has the ability to fundamentally transform the West Bank and Gaza and to open a new chapter in Palestinian history—one defined, not by adversity and loss, but by freedom and dignity. 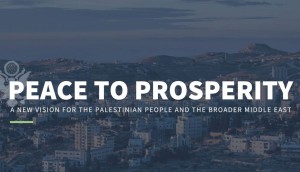 The Trump administration has now kicked off an economic portion of its long-awaited plan for Arab-Israeli peace.

The White House website called the document “a new vision for the Palestinian people and broader Middle East.” However Kushner’s approach – economic development before political settlement – is not totally unique for solving Israel-Palestine conflict. The US vision essentially turns the “refugees” from liabilities into assets, thereby taking the refugee issue off the table. There is an example from year 1959 when UNSG Dag Hammarskjold presented his initiative (UN General Assembly document no. A/4121) absorpt the refugees into the economy of the Arab region financed by oil revenues and international funds up to $2 billion.

The Hammarskjold and Kushner plans had/have similar intentions but faced also with same critics. Putting economic cooperation with Israel ahead of political cooperation was deemed unacceptable, no matter what benefits might create to the Palestinian people. The main objection by Palestinian Authority is that the plan offers an economic vision but postpones the political issues at the core of the Israeli-Palestinian conflict. The difference is that some members of Arab League now are behind new plan and critics is coming mostly from the current leadership of Palestinian Authority. This makes it easier for Trump/Kushner also to implement the deal.

Comprehensive peace proposals were presented to Palestinian leadership three times in the past – once by the United Nations (1947) and twice by Israel (2000, 2008). All three times, Palestinian leadership rejected broad peace deals, while Israel said yes. Palestinian rejection – anchored in refusal to accept the right of Israel to exist as a Jewish state – remains the primary obstacle to peace. As Israel made major concessions for peace with Egypt and Jordan , so probably Israel will do the same with Palestinians.

This time thee U.S. initiative has a wide regional support and probably it will gain support also among Palestinian population as it indeed gives “a vision to empower the Palestinian people to build a prosperous and vibrant Palestinian society.” So from my point of view the plan, also its political part, has good change to be implemented also without acceptance from current Palestinian leadership.

Israel and Palestinian Authority have negotiated two decades about solution based on Two-States, and now maybe more than ever one can claim that the roadmap towards it is the dead end. Instead the situation today is drifting towards One-State option, which is unwanted outcome for both parties. The outcome of the U.S. initiative may well be Two-States but the roadmap is new with regional and economy first approach and this in my opinion gives a better change for positive development and even solution this time.

The main sources for  this article have been: BESA, The White House and The Focus project.

This article first appeared in Conflicts by Ari Rusila website